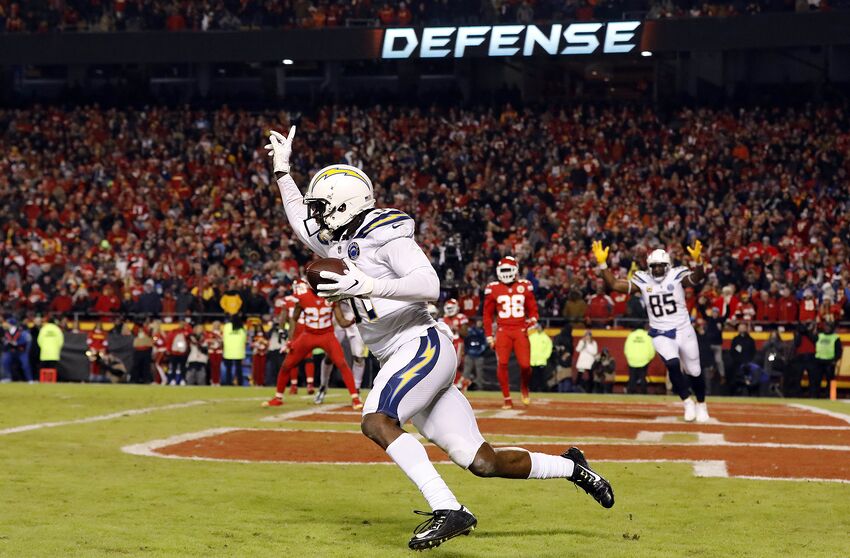 KANSAS CITY, MISSOURI – DECEMBER 13: Wide receiver Mike Williams #81 of the Los Angeles Chargers celebrates after catching the two point conversion with 4 seconds remaining in the game to put the Chargers up 29-28 on the Kansas City Chiefs at Arrowhead Stadium on December 13, 2018 in Kansas City, Missouri. (Photo by David Eulitt/Getty Images)

The Chargers got their first lead with four seconds left after a successful two-point conversion to beat the Chiefs and are tied for first place in the AFC West.

The Los Angeles Chargers snapped their nine-game losing streak vs. the Kansas City Chiefs to improve to 11-3 and are tied atop the AFC West. Philp Rivers threw a 1-yard touchdown to Mike Williams, his third score of the night, with four seconds remaining after a Chiefs pass interference penalty. After an official review, Chargers coach Anthony Lynn went for the win and the two-point conversion and Rivers connected again with Williams who had the best game of his young NFL career.

The Chargers clinched a playoff berth with the win but they are still alive for the No. 1 seed in the AFC. They’ll need the Chiefs to lose a game as they control their destiny despite blowing a late lead on Thursday Night Football.

Los Angeles hosts the Ravens in Week 16 and travel to the Broncos in the season finale. The Chiefs are at the Seahawks in Week 16 and host the Raiders in Week 17 and home-field advantage could be on the line if both win next week.

Kansas City led all game behind a pair of Patrick Mahomes touchdowns and three rushing touchdowns from Damien Williams and looked on their way to securing the division and a first-round bye with a win.

Justin Jackson, filling in for the injured Melvin Gordon and Austin Ekelier, made it a 28-21 game with 3:49 left and gave the Chargers a chance if they could get a stop.

The Chargers defense forced a three-and-out on the ensuing possession and gave Rivers a chance to provide some late-game heroics.